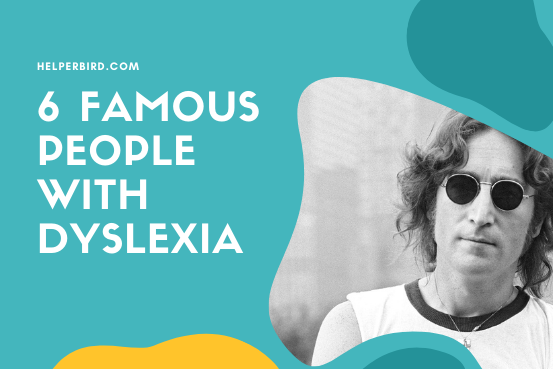 One might stumble upon a word from a book they’re reading and miscomprehend it. Maybe they see the
word, world as “worlb” or “bants” instead of pants. This could also be in a similar situation in
writing, where the person misspells words frequently. These are common signs for people with a
learning disability called Dyslexia. Dyslexia is a genetic derived learning disability that causes
difficulty in reading comprehension and writing. People that have this condition perceive and learn
things differently which is often misunderstood by society.

Even though it is a challenge, a lot of dyslexics still manage to live normal lives in which most of
them became successful in their own path of careers. In fact, many of them we already know but don’t
have any idea they have it.

Here are the six famous people with Dyslexia:

“I got… lost in being at high school. I used to say to my auntie “you throw my poetry out, and you
will regret it when I am famous.”

The musical genius John Lennon was known to be the founder of the Beatles band. It wasn’t until in
his later adulthood that he discovered he has dyslexia. He couldn’t spell right nor remember other
people’s compositions, but he could write his own effortlessly.

Despite his poor grades at school, he is exceptionally good at art which he later tried pursuing by
attending Liverpool College of Art, in England. He said in his 1971 Rolling Stone interview that he
has always been aware that he is different from others. His mind works differently which is the
reason why he’s terrible in other subjects that don’t interest him. His giftedness to influence
others with his music and life’s beliefs is proof that his condition is not something to be fixed
rather be valued.

“I am a slow reader. I always loved words, which is a strange thing given that I couldn’t actually
read them.”

A lot of people know her as Elizabeth Swann from the hit film series Pirates of the Caribbean. Keira
Knightley was diagnosed with dyslexia as early as age six. She convinced her parents that if she
learned how to read, they would find her a way to pursue her dream of being an actress. Her mother
told her that if she could memorize Emma Thompson’s screenplay of Sense and Sensibility her favor
will be granted.

This made Keira more immersed to push herself on learning and improving herself of dealing with
dyslexia. Now, she is one of the most sought-after Hollywood actresses who starred in different
movies such as Joan Clarke from The Imitation Game and Elizabeth Bennet from the classic Jane Austen
novel, Pride and Prejudice.

“You are not alone, while you have dyslexia for the rest of your life, you can dart between the
raindrops to get where you want to go. It will not hold you back.”

The renowned Academy Award-winning director, producer, and screenplay writer, Steven Spielberg was
not diagnosed with dyslexia until he was 60 years old. During his younger years, he always felt out
of place and wanted somewhere else but school. It took a wide span of years for him to finally
figure out behind his struggle with reading and understanding words.

Regardless, this didn’t impede his ability to craft blockbuster films like E.T., Indiana Jones,
Jurassic Park, and The Color Purple.

“I am where I am because I believe in all possibilities.” Before becoming a famous actress, TV
host, comedian, and author, Goldberg was once bullied for being different and slow to learn things
in school. She also suffered drug addiction at age 17.

What made her get out of that situation is her mother’s motivation and persistence. Her mother
believed in her daughter’s abilities to be a successful woman, and so she did. Today, she remained a
supporter of dyslexia campaigns spreading awareness that thinking differently is an advantage to
uphold.

"I paint objects as I think them, not as I see them." The man behind the famous paintings, The
Young Ladies of Avignon and Guernica is a well-known dyslexic. He saw words in jumbled forms with
unique patterns. Known for being a mischievous student, Picasso took the opportunity to make art
on the times he was sent out from the classroom. Although he had finished school at Barcelona’s
School of Fine Arts, he always had a mind of his own.

He spent most of his days, traveling to different parts of the city, sketching scenes that inspire
him. Instead of feeling entrapped by dyslexia, he used it to his advantage to produce his life’s
greatest master art pieces.

“All of us invent ourselves. Some of us just have more imagination than others.” It was not until
in her thirties that Cher found out she has dyslexia. All those dragging days at school finally
made sense to her of why it was difficult for her to process all information. She dropped out of
school at age 16 and began her acting journey, but it was her musical prowess that made her famous
in the entertainment industry. She sold millions of records and won a film Academy award for her
movie Moonstruck. It was a tough battle for Cher knowing she has to do a lot of memorizations but
she managed to do it by embracing her own pace and accepting the fact she is different from how
other people learn. These famous personas opened doors for discussions towards Dyslexia.

They are examples that dyslexia is manageable and nothing to be felt pity about. People’s brains may
have been wired differently but their capacity to learn and understand things are not something to
be judged but should be encouraged to their highest potentials.